Ash Wednesday is the first day of Lent in the Western Christian calendar, directly following Shrove Tuesday.[2] Occurring 46 days before Easter, it is a moveable feast that can fall as early as February 4 and as late as March 10.

According to the canonical gospels of Matthew, Mark and Luke, Jesus spent 40 days fasting in the desert, where he endured temptation by Satan.[3][4] Ash Wednesday marks the beginning of this 40-day liturgical period of prayer and fasting or abstinence. Of the 46 days until Easter, six are Sundays. As the Christian sabbath, Sundays are not included in the fasting period and are instead “feast” days during Lent.

Ash Wednesday derives its name from the practice of placing ashes on the foreheads of adherents as a celebration and reminder of human mortality, and as a sign of mourning and repentance to God. The ashes used are typically gathered from the burning of the palms from the previous year’s Palm Sunday.[5]

The imposition of ashes on Ash Wednesday has been historically observed by Anglican, Catholic, and Lutheran Christians.[6][7][8] It has also become a standard practice in the Methodist Church.[9][10] In addition to these liturgical denominations,[11] some Anabaptist and Reformed churches, which abandoned the practice after the Reformation, now also observe this day,[6][12] which has become popular in much of Christianity in general.[11]

At Masses and services of worship on this day, ashes are imposed on the foreheads of the faithful (or on the tonsure spots, in the case of some clergy). The priest, minister, or in some cases officiating layperson, marks the forehead of each participant with black ashes in the sign of the cross, which the worshipper traditionally retains until it wears off. The act echoes the ancient Near Eastern tradition of throwing ashes over one’s head to signify repentance before God (as related in the Bible). The priest or minister says one or both of the following when applying the ashes:

Remember that thou art dust, and to dust thou shalt return.

Repent, and believe the Gospel. 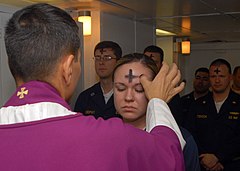 The imposition of ashes on Ash Wednesday

Ashes may also be sprinkled on the top of the head, as shown in this 1881 Polish painting.

One tradition is to keep palm fronds from the previous year’s Palm Sunday to be burned to produce the ashes.[13]

The liturgical imposition of ashes on Ash Wednesday is a sacramental, not a sacrament, and in the Catholic understanding of the term the ashes themselves are also a sacramental. The ashes are blessed according to various rites proper to each liturgical tradition, sometimes involving the use of Holy Water. In some churches, they are mixed with a small amount of water[14] or olive oil,[15] which serve as a fixative. In most liturgies for Ash Wednesday, the Penitential psalms are read; Psalm 51 (LXX Psalm 50) is especially associated with this day.[16] The service also often includes a corporate confession rite.

In some of the low church traditions, other practices are sometimes added or substituted, as other ways of symbolizing the confession and penitence of the day. For example, in one common variation, small cards are distributed to the congregation on which people are invited to write a sin they wish to confess. These small cards are brought forth to the altar table where they are burned.[17]

In the Catholic Church, ashes, being sacramentals, may be given to anyone who wishes to receive them,[18][19] as opposed to Catholic sacraments, which are generally reserved for church members, except in cases of grave necessity.[20][21] Similarly, in other Christian denominations ashes may be received by all who profess the Christian faith and are baptized.[22]

In the Catholic Church, Ash Wednesday is observed by fasting, abstinence from meat, and repentance—a day of contemplating one’s transgressions. The Anglican Book of Common Prayer also designates Ash Wednesday as a day of fasting. In the medieval period, Ash Wednesday was the required annual day of penitential confession occurring after fasting and the remittance of the tithe. In other Christian denominations these practices are optional, with the main focus being on repentance. On Ash Wednesday and Good Friday, Catholics between the ages of 18 and 59 (whose health enables them to do so) are permitted to consume only one full meal, which may be supplemented by two smaller meals, which together should not equal the full meal. Some Catholics will go beyond the minimum obligations demanded by the Church and undertake a complete fast or a bread and water fast. Ash Wednesday and Good Friday are also days of abstinence from meat (mammals and fowl), as are all Fridays during Lent.[23] Some Catholics continue fasting throughout Lent,[citation needed] as was the Church’s traditional requirement,[24] concluding only after the celebration of the Easter Vigil.

Upon exiting the church, Lutheran pastor Richard P. Bucher and Catholic bishop Kieran Conry state Christians leave the ashed sign of the cross on their foreheads for the remainder of the day in order to point others to faith in Jesus.[25][26] The Reverend Morgan Guyton, speaking on behalf of the Red-Letter Christian movement within Christianity, encourages Christians to receive and wear ashes on their foreheads throughout the day in order to exercise their religious freedom.[27]

As the first day of Lent, Ash Wednesday comes the day after Shrove Tuesday or Mardi Gras (Fat Tuesday), the last day of the Carnival season. Dutch tradition holds the custom to eat salted herring on Ash Wednesday to conclude the carnival in the Netherlands.

“Ash Wednesday” by Carl Spitzweg: the end of Carnival.

Ashes were used in ancient times to express mourning. Dusting oneself with ashes was the penitent’s way of expressing sorrow for sins and faults. An ancient example of one expressing one’s penitence is found in Job 42:3–6. Job says to God: “I have heard of thee by the hearing of the ear: but now mine eye seeth thee. The other eye wandereth of its own accord. Wherefore I abhor myself, and repent in dust and ashes.” (vv. 5–6, KJV) The prophet Jeremiah, for example, calls for repentance this way: “O daughter of my people, gird on sackcloth, roll in the ashes” (Jer 6:26). The prophet Daniel recounted pleading to God this way: “I turned to the Lord God, pleading in earnest prayer, with fasting, sackcloth and ashes” (Daniel 9:3). Just prior to the New Testament period, the rebels fighting for Jewish independence, the Maccabees, prepared for battle using ashes: “That day they fasted and wore sackcloth; they sprinkled ashes on their heads and tore their clothes” (1 Maccabees 3:47; see also 4:39).

Other examples are found in several other books of the Bible including, Numbers 19:9, 19:17, Jonah 3:6, Matthew 11:21, and Luke 10:13, and Hebrews 9:13. Ezekiel 9 also speaks of a linen-clad messenger marking the forehead of the city inhabitants that have sorrow over the sins of the people. All those without the mark are destroyed.

It marks the start of a 43-day period which is an allusion to the separation of Jesus in the desert to fast and pray. During this time he was tempted. Matthew 4:1–11, Mark 1:12–13, and Luke 4:1–13.[28] While not specifically instituted in the Bible text, the 40-day period of repentance is also analogous to the 40 days during which Moses repented and fasted in response to the making of the Golden calf. (Jews today follow a 40-day period of repenting in preparation for and during the High Holy Days from Rosh Chodesh Elul to Yom Kippur.)

In Victorian England, theatres refrained from presenting costumed shows on Ash Wednesday, so they provided other entertainments.[29]

Ash Wednesday is a moveable fast, occurring 46 days before Easter. In future years Ash Wednesday will occur on these dates:

These Christian denominations are among those that mark Ash Wednesday with a particular liturgy or church service.

The Eastern Orthodox Church does not, in general, observe Ash Wednesday; instead, Orthodox Great Lent begins on Clean Monday. There are, however, a relatively small number of Orthodox Christians who follow the Western Rite; these do observe Ash Wednesday, although often on a different day from the previously mentioned denominations, as its date is determined from the Orthodox calculation of Pascha, which may be as much as a month later than the Western observance of Easter.

In the Republic of Ireland, Ash Wednesday is National No Smoking Day.[30][31] The date was chosen because quitting smoking ties in with giving up luxury for Lent.[32][33] In the United Kingdom, No Smoking Day was held for the first time on Ash Wednesday 1984,[34] but is now fixed as the second Wednesday in March.[35]

This article uses material from the Wikipedia article Ash Wednesday, which is released under the Creative Commons Attribution-Share-Alike License 3.0.

What are your thoughts? Cancel reply

This site uses Akismet to reduce spam. Learn how your comment data is processed.

Our sister parishes in West Cardiff are: